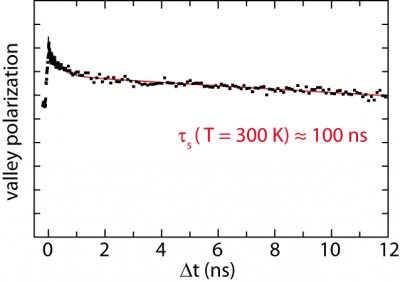 Nano Lett. 19, 4083(2019) We present time-resolved Kerr rotation measurements, showing spin lifetimes of over 100 ns at room temperature in monolayer MoSe2. These long lifetimes are accompanied by an intriguing temperature-dependence of the Kerr amplitude, which increases with temperature up to 50 K and then abruptly switches sign. Using ab initio simulations, we explain the latter behavior in terms of the intrinsic electron–phonon coupling and the activation of transitions to secondary valleys. The phonon-assisted scattering of the photoexcited electron–hole pairs prepares a valley spin polarization within the first few ps after laser excitation. The sign of the total valley magnetization, and thus the Kerr amplitude, switches as a function of temperature, as conduction and valence band states exhibit different phonon-mediated intervalley scattering rates. However, the electron–phonon scattering on the ps time scale does not provide an explanation for the long spin lifetimes. Hence, we deduce that the initial spin polarization must be transferred into spin states, which are protected from the intrinsic electron–phonon coupling, and are most likely resident charge carriers, which are not part of the itinerant valence or conduction band states.

New Publication: A corner reflector of graphene Dirac fermions as a phonon-scattering sensor 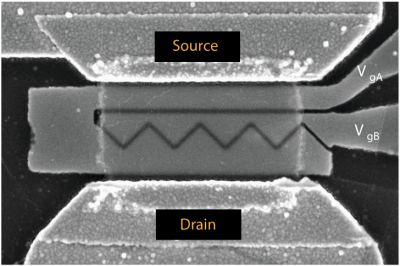 After several months of preparation our Institute was ready to line up at another big sports competition - the Düsseldorf Marathon 2019. Together with over 20000 other runners and the best weather conditions Markus Müller (1:35:59) and Benedikt Frohn (1:42:39) went for the 21.1km half Marathon distance while Michael Schmitz successfully finished the full 42.2km Marathon in 2:59:33. Gratulations!

In the early sunday morning the at freezing temperatures and snow fall, our colleagues Michael Schmitz and Samuel Möller took part in the Powerman Alsdorf Duathlon together with over 700 other athletes. Competing in the relay race they had to alternately run, bike and run 10KM/60KM/10KM. With splits of 36:42, 1:34:02 and 37:27 and a total time of 2:50:20 they distanced by far all other relay competitors and took the first place. Gratulations! 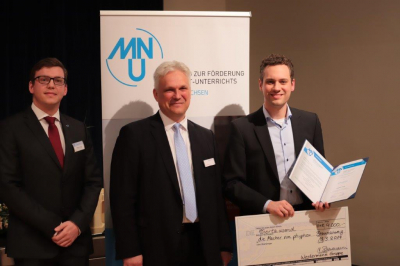 The phyphox team has been awarded the "Archimedes award" 2019 by the "Verband zur Förderung des MINT-Unterrichts" (MNU, loosely translated: association to forward STEM education). The award entails 4,000€ sponsored by the Westermann group. It is awarded yearly, alternating in the fields of mathematics and physics, to decorate innovative concepts and teaching methods as well as particularly commited teachers.

The app allows students to use the sensors of their smartphones to conduct physics experiments in physics education. It has been developed at the 2nd Institute of Physics at the RWTH Aachen University under the direction of Prof. Christoph Stampfer and Dr. Sebastian Staacks statt and it is being continuously refined in cooperation with the 1st Institute of Physics under Prof. Heidrun Heinke and a team of PhD students.

The award does not only mention the app itself, but the MNU emphasizes the value of the accompanying material like the demonstration videos. With more than 600,000 installations worldwide phyphox has been establish in many schools since its first release in September 2016.

DFG to establish a new Priority Programme on 2D Materials

The German Research Foundation (DFG) is establishing 14 new Priority Programmes (SPP) for the year 2020. This was decided by the DFG Senate in Bonn. One of the 14 new programs, selected from 50 submitted initiatives, was set up with the contribution of Prof. Christoph Stampfer (a member of the Aachen Graphene & 2D Materials Center) and focuses on 2D materials. The new programon is entitled "2D Materials - Physics of van der Waals Heterostructures (2DMP)" and it is coordinated by Prof. Dr. Thomas Heine (TU Dresden). 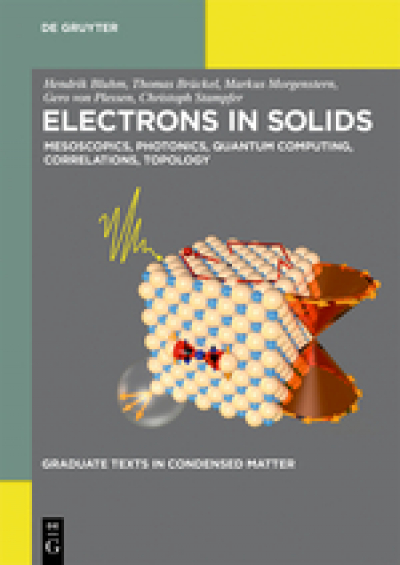 As a continuation of classical condensed matter physics texts, this graduate textbook on “Electrons in Solids” introduces advanced topics of correlated electron systems, mesoscopic transport, low-dimensional electron systems, unconventional superconductivity and topological insulators. These aspects are complemented by theoretical aspects of quantum information theory as well as solid state implementations. The book covers modern many body theory and effects arising from correlated electron systems and closes a gap between basic condensed matter textbooks and the forefront of research.