Next talk on Tuesday in 6 days by Manfred Ersfeld. 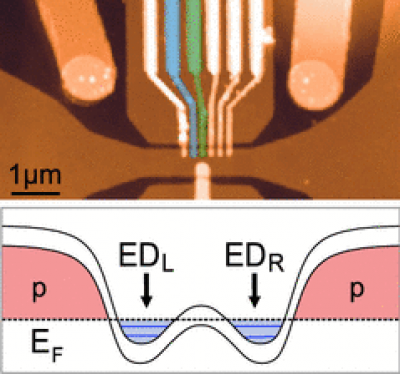 Nano Letters 20, 2005 (2020) We present transport measurements through an electrostatically defined bilayer graphene double quantum dot in the single-electron regime. With the help of a back gate, two split gates, and two finger gates, we are able to control the number of charge carriers on two gate-defined quantum dots independently between zero and five. The high tunability of the device meets requirements to make such a device a suitable building block for spin-qubits. In the single-electron regime, we determine interdot tunnel rates on the order of 2 GHz. Both, the interdot tunnel coupling as well as the capacitive interdot coupling increase with dot occupation, leading to the transition to a single quantum dot. Finite bias magneto-spectroscopy measurements allow to resolve the excited-state spectra of the first electrons in the double quantum dot and are in agreement with spin and valley conserving interdot tunneling processes.